Paying homage to the Rose Countess and the Moonlight Sonata 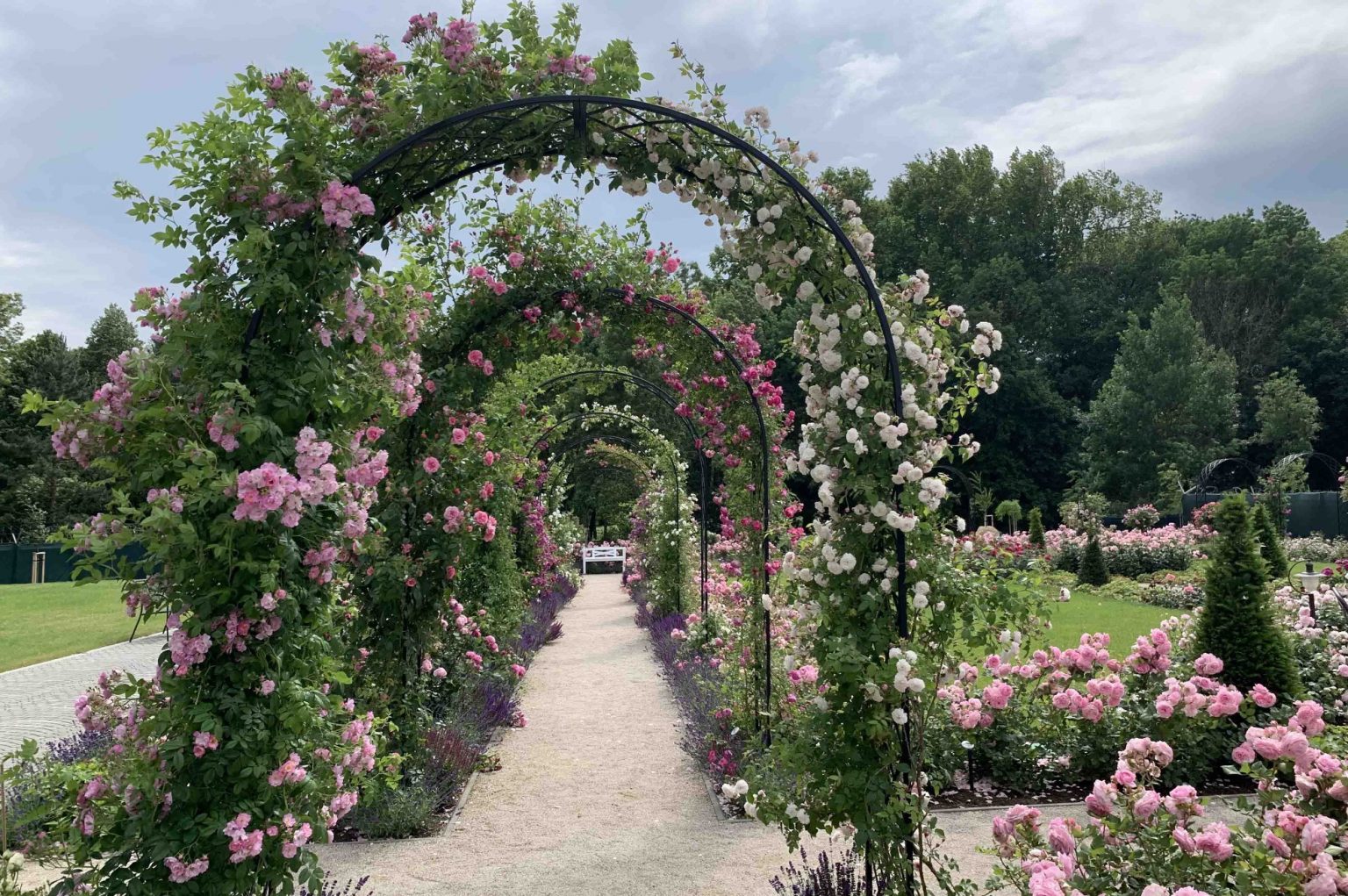 Posted at 09:34h in Rose Arch Metal by Johannes Dietrich

In 2019, a rose garden called the Rozárium M. H. Chotekovej – Medolandia opened in Dolná Krupá, a village in the west of Slovakia, at the foot of the Little Carpathians mountain range and not far from the city of Trnava. This rosarium is definitely one to keep your eye on and arrange to visit, as soon as the opportunity arises. Read why:

Although the Rozárium M. H. Chotekovej – Medolandia only opened in 2019, this is not the first time that roses have been grown on this site. Far from it. Over 100 years ago, Countess Maria Henrietta Chotek grew more than 6,000 different varieties of roses here. Chotek, who came to be known as the Rose Countess, was in close contact with some of the most famous rose experts of the day, such as Jules Gravereaux from France or Wilhelm Kordes and Peter Lambert from Germany. When Rudolf Geschwind, the most well-known rose grower in the Austro-Hungarian Empire, died, Chotek bought the majority of his roses. It is thanks to her that today, there are 29 of Geschwind’s especially hardy rose varieties, the so-called Nordland Roses, in the Europa Rosarium in Sangerhausen, Germany.

Now, thanks to a married couple called Peter Kudláč and Mária Kudláčová, and their company APIMED (Trnavská Medovina), over 1,000 roses have been planted in close proximity to the site where Countess Chotek’s rosarium once stood.

Rose arches and rose obelisks at the new rosarium

Most of the roses on display in the Rozárium M. H. Chotekovej – Medolandia come from the Kalbus rose nursery in Altdorf, near Nuremberg. Johannes Kalbus also designed the garden plan for the new rosarium, focussing largely on historic roses. In the rose garden there are many climbing roses, mostly varieties that were popular at the end of the 19th and start of the 20th century. Many of these climbing roses were already well established in the Rozárium M. H. Chotekovej – Medolandia by the summer of 2020, having rapidly made their way up and over the 28 Classic Garden Elements Bagatelle Round-Top Garden Arches that can be found in the rose garden. 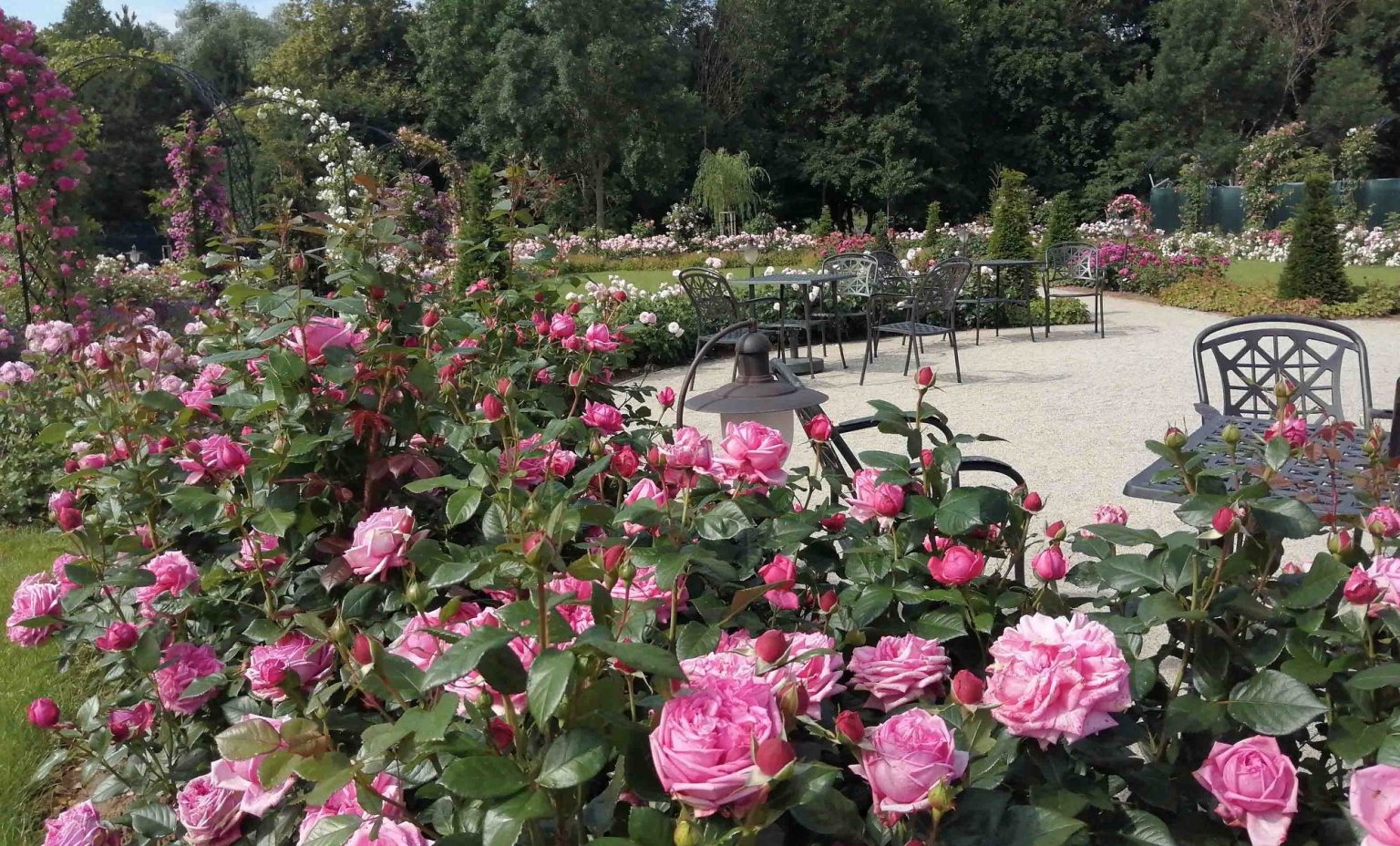 The rose arches, which are positioned one behind the other along two long paths, make an extremely attractive focal point within the garden. As well as these glorious rose arches, a number of three-wing rose obelisks – examples of the Classic Garden Elements Rose Obelisk II – also stand proudly here, in the largest private rose garden in Slovakia. These rose obelisks offer the perfect growing support to shrub roses and, with their elegant metal wings, they fit in wonderfully amongst the historic roses found throughout the garden.

As you explore the rosarium further, more and more Classic Garden Elements garden structures come to light. The garden archways and garden obelisks are just the start! Countless standard roses, many of which stand at 90 cm in height, are supported by the wonderfully decorative Jules Gravereaux Garden Stakes. 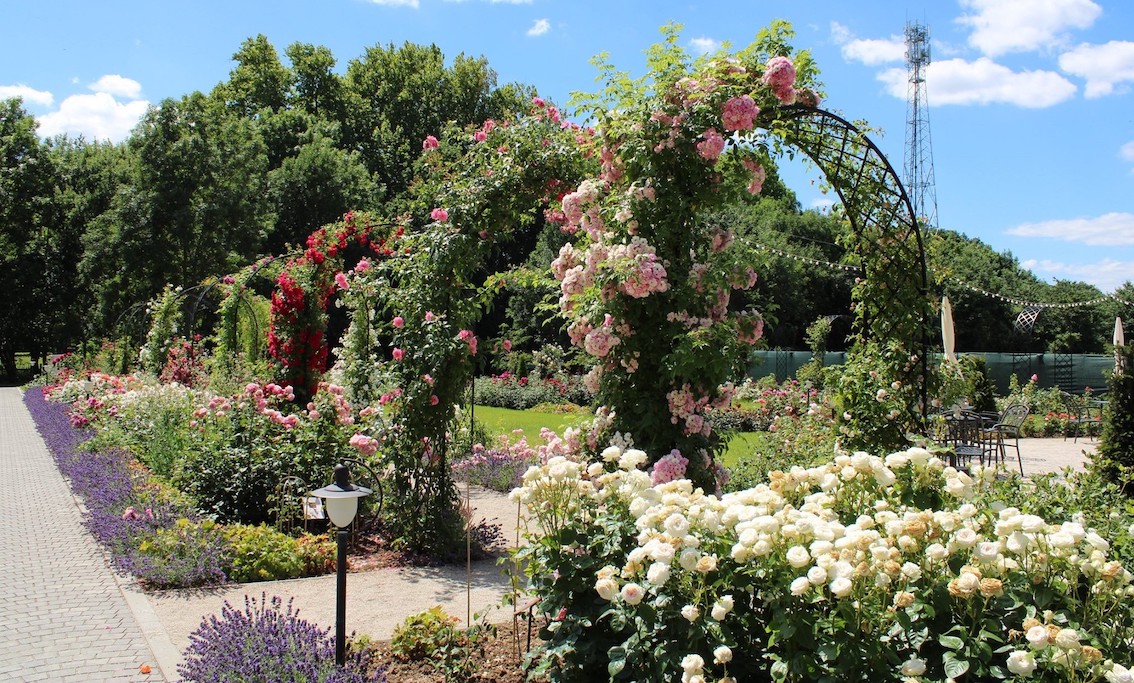 Taller still than the standard roses are the Rose Countess Maria Henrietta roses, the stems of which have been grafted with climbing roses and which can stand up to 140 cm in height. This gloriously scented rose was bred by the Kordes rose nursery in Sparrieshoop, near Hamburg, in honour of the Countess – and thus, appropriately, is named after her. In the Rozárium M. H. Chotekovej – Medolandia, these roses can be seen being supported by some of the Classic Garden Elements Giverny Rose Umbrella Supports, which display weeping standard roses such as this one to perfection.

And as if all of these different decorative elements and the impressive array of historic roses on display weren’t enough, the rosarium is also incredibly well tended and cared for. The result is an absolutely gorgeous rose garden that you won’t forget in a hurry!

In the centre of Dolná Krupá, just a stone’s throw from the new Rozárium M. H. Chotekovej – Medolandia, stands  a striking building: the Manor House. This Classicist-style house was built between 1793 and 1795, and was originally owned by the noble Brunswick family. 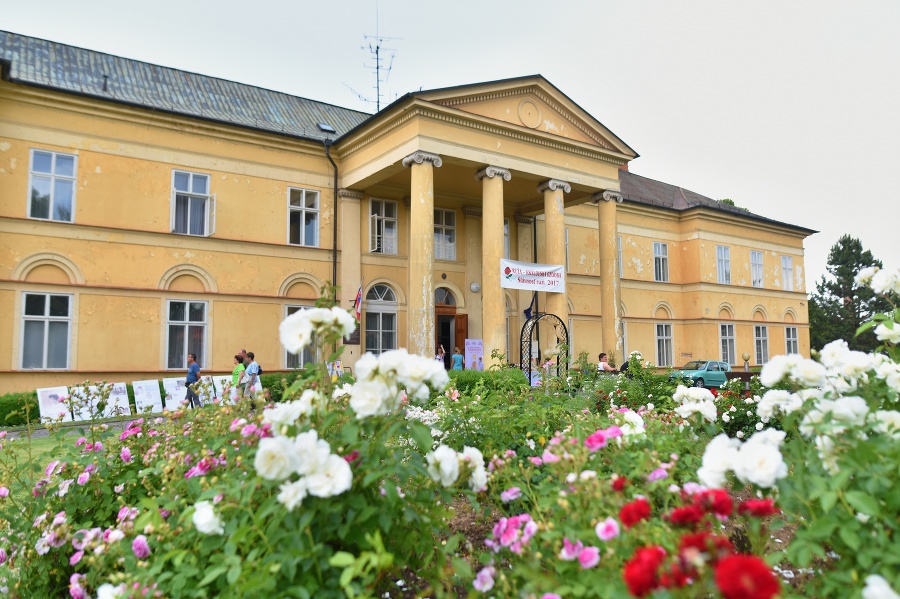 Between 1813 and 1819, the land around it was turned into an English-style park that covers an impressive 247 hectares. The landscaping work was carried out by the German garden and landscape designer Christian Heinrich Nebbien. Once complete, the park was one of the most important examples of landscape architecture in all of the Kingdom of Hungary. It was also here that Countess Maria Henrietta Chotek grew her roses.

The members of the Brunswick family were art lovers and important patrons of the arts. They loved music in particular and had their own theatre at the Manor House. Family members acted in the plays that were put on there.

Ludwig van Beethoven was a close friend of the Brunswicks. In 1800, 1801 and 1806, Count Joseph Brunswick (1750–1827) invited Beethoven to stay with the family at the Manor House. During his visits, Beethoven stayed in the baroque head gardener’s house located next to the Manor House itself. According to the Brunswick family, it was here that he composed the famous Sonata Claire de Lune, which he dedicated to Countess Julie Guicciardi, a piano student with whom he had fallen in love.

Today the head gardener’s house where Beethoven once stayed has been turned into a small museum dedicated to the composer and his Moonlight Sonata, officially called the ‘Piano Sonata No. 14, Op. 27, No. 2’. And a stone’s throw away the new Rozárium M. H. Chotekovej – Medolandia with its scented colourful roses now pays homage to one of the world’s greatest pieces of classical music ever written. 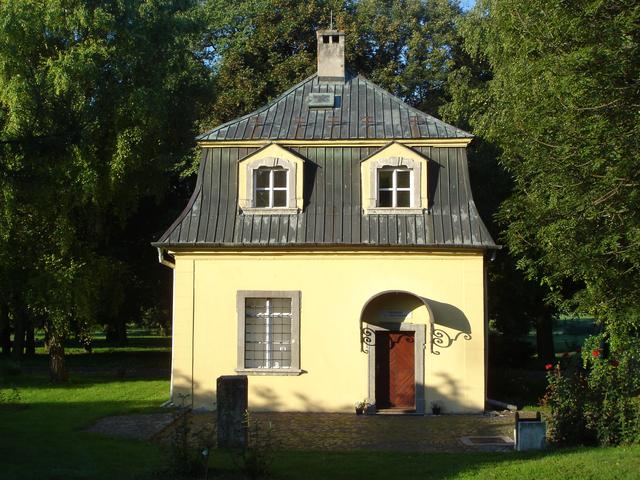 If you’re travelling to Dolná Krupá with your heart set on a truly rose-filled experience, make sure you set aside enough time to really do the Rozárium M. H. Chotekovej – Medolandia justice. If you want to experience the rose garden at its finest, then plan your visit for June, when the flowers will be in full bloom. Roses of all shapes, sizes and colours await you, but it’s not just a feast for the eyes – the scent of the roses is also totally overwhelming! This truly is a floral oasis that you don’t want to miss.

There are also many other plants to enjoy here, planted alongside the roses, and many of them – such as lavender, sage and cranesbill – are also very bee-friendly. In fact, speaking of bees, the honey from these bees is actually used to make the APIMED mead that is sold all around the world. You can try the mead yourself when you visit and enjoy it just a stone’s throw from where it’s produced, such as in the mead cellar, at the rosarium’s restaurant or even in the rose garden itself.