The Story behind Our Trademark

Classic Garden Elements’ trademark was inspired by the ancient Etruscan bronze pine cone on display at the Vatican in Rome. The first version of our cone was created over 20 years ago. A sculptor from Trnava, not far from Vienna, made the first mould. In a second version, the pine cone’s scales were opened up significantly, giving it the marked structure it has today. The first copies of this version were cast at a bell foundry in Trenčín in Slovakia.

The pine cone is a symbol of fertility, renewal and immortality and echoes the harmony and beauty we find in the natural world. The cone shown here crowns our Charleston Rose Obelisk, covered in Ballerina roses, as exhibited at the Chelsea Flower Show. Many of our other plant supports are also topped with this distinctive emblem, such as the round Metal Garden Obelisk I, the three-wing Rose Obelisk II, the Gothic-inspired Kiftsgate and Brighton Victorian Garden Arches, the romantic Victorian Arbour, the Kiftsgate Metal Gazebo, the mighty columns of the St. Albans Garden Archway, the Piemont Pergola and the Paravent and Restaurant Metal Fence Panels. Click here to find our Metal Garden Arches and Metal Garden Archways.

How Are Our Metal Pine Cones Produced?

The metal pine cones for our garden arches, metal gazebos and garden ornaments are produced in an art foundry that specialises in casting church bells. The bell foundry uses a complex metal mould in the shape of our trademark ornament to produce the pine cones, which are cast in aluminium and weigh two kilos each. At 18 centimetres high and with a circumference of 45 centimetres, our pine cones are truly eye-catching. There are numerous stages in the production of each one, a process that is begun in the foundry and is later completed in our workshop. First, the aluminium needs to be warmed in an oven. Then it gets fully melted down in a crucible before being poured into the mould. The melting point of the aluminium is around 600 to 680 °C. During this liquefying process, hydrogen is produced, which can lead to bubbles in the melted metal, something the foundry workers try to avoid. Finally, the aluminium is cooled in the mould. It is important that the metal isn’t allowed to oxidise right away in the open air. Getting all of this right in order to produce beautiful metal pieces is definitely a real art!

Once the casting process is complete, the pine cones need to be finished in our workshop. This involves tapping a threaded hole into each pine cone by hand before preparing the piece to be powder coated. More than two hours of craftsmanship goes into each pine cone at this stage, with each and every one being picked up and worked on up to 22 times. As we pride ourselves on consistently delivering high-quality products, each piece also has to go through five separate quality checks before we are ready to pronounce it finished. 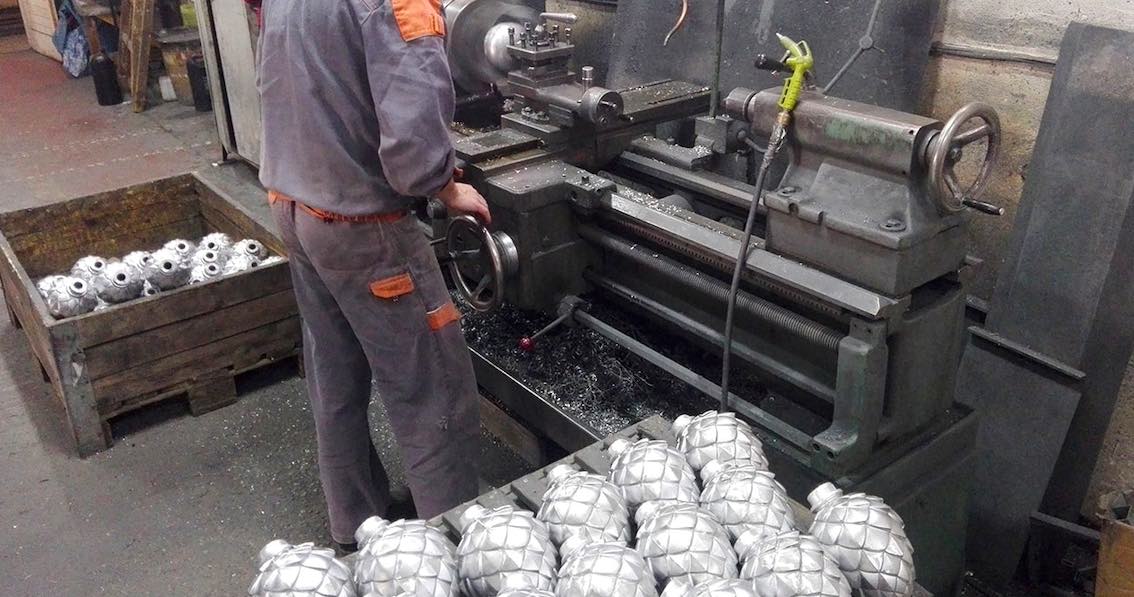 For particularly tall gazebos and French treillage panels, we make an even bigger version of our pine cone. At 26 centimetres in height and with a 65-centimetre circumference, this larger model is stately and quite splendid. The production process of these pieces is somewhat different than that of their little siblings. Instead of utilising a metal mould, here we use something called the ‘lost wax technique’, a process that hasn’t changed since ancient times. It all starts with a plaster model of our pine cone, from which a wax version is made. Next, this wax model is covered in a clay-based mixture, and the whole thing is then burnt at a high temperature. The wax melts and flows out of the mould via small openings. What’s left is a hollow, burnt clay mould with openings, into which the hot liquid aluminium is then poured. Once the metal has fully cooled, the clay mould is shattered to reveal the aluminium casting of our pine cone.

This clever casting technique has a long history: all of the important antique and medieval cast bronze sculptures were produced using this method, and it remains popular today. For example, the Rolls Royce bonnet ornaments are made in this way, and the technique is also used in modern dental technology. 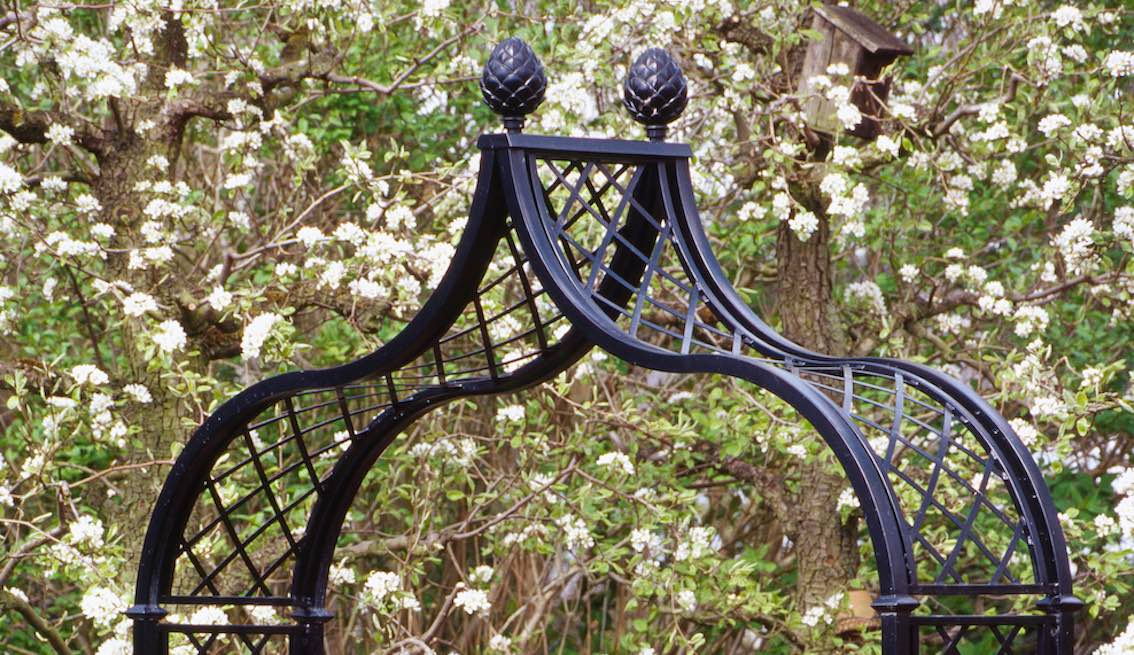 Alongside the classic aluminium pine cones, we also offer our customers gilded pine cones – and we have done since day one of Classic Garden Elements over twenty years ago. The gold leaf is applied to the pine cones by gilder Anja Gerbrandt at her workshop in Hamburg, and her work results in stunningly beautiful pine cones that shimmer and shine in the sun and will continue to do so for years to come. One of our shareholders has two gilded pine cones sitting proudly atop the roof of his house. He had them installed 16 years ago and since then, amazingly, no patina has formed on their surfaces – they sparkle and glitter as much today as they did when they were brand new.

The Symbolism of the Pine Cone

The pine cone has been used as a symbolic, decorative shape since ancient times. In archaeology and art history, the term ‘pine cone’ is used to describe an ornament that resembles a stylised version of the fruit of the pine tree. In the Christian tradition, the pine is thought of as the tree of life, while the cones are said to represent resurrection and immortality. Christianity inherited this age-old symbolism from the ancient cults of Isis, Dionysus and Cybele. In the central European provinces of ancient Rome, it was common for tombs to be decorated with pine cones. Visitors to Rome today can admire a giant, 2.5-metre-high bronze pine cone, which is situated at the Cortile della Pigna in Vatican City.

Originally plated in gold, it was probably once the focal point of a monumental fountain at the ancient Temple of Isis and Serapis at the Campus Martius in Rome. It is sometimes said that the pine cone was once used to seal the oculus (or hole) in the Parthenon’s dome, but this is most likely just a legend. With the spread of Christianity, the pine cone became known all over Europe and was widely used as a decorative element both in religious and secular buildings, and particularly in garden architecture. So there you have it – everything you need to know about our metal pine cones. We’re proud that such striking, hand-finished pieces adorn our garden arches, arbours and garden archways and hope that each one brings much pleasure and enjoyment for many years to come.