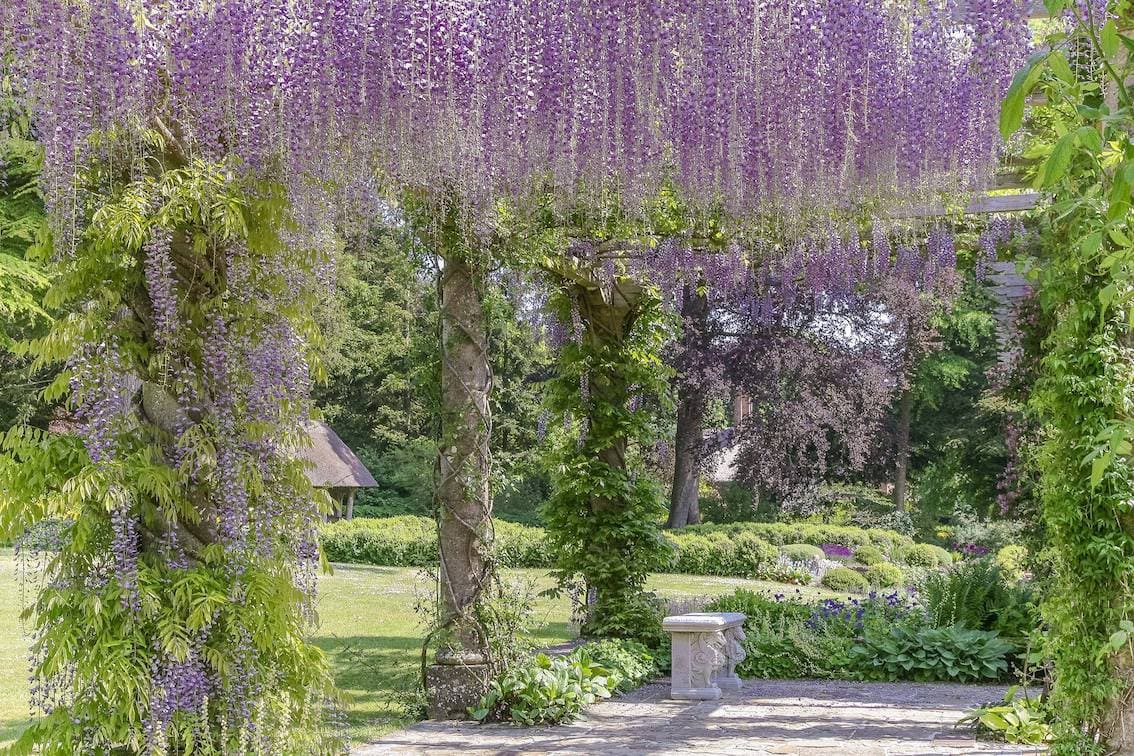 Posted at 17:14h in Metal Garden Deko by Johannes Dietrich

Wisteria, stunning climbing plants that have hanging clusters of lilac-coloured flowers, are native to Japan and China. Although extremely attractive, these plants are also incredibly strong and can climb trees at lightning speed – potentially throttling the poor tree in the process. They really are not to be underestimated! That’s why, if you’re considering a wisteria for your garden, it’s best to think long-term and choose the right spot for your wisteria. You’ll also need to consider what the best growing support would be for it, and you’d be best off with a particularly robust structure – one that is capable of holding its own against this lilac force of nature!

In the photo you can see a gorgeous 30-year-old wisteria growing at West Dean Gardens, near Chichester in West Sussex. With its opulent scent, this exquisite Japanese wisteria (Wisteria floribunda) marks the start of the glorious floral show that centres around an Edwardian pergola. This wonderful wooden pergola is a protected structure, as it is considered an historically important piece of garden architecture, and it needs to be repaired from time to time. Running east–west across the North Lawn, this stable, horizontal structure is supported by solid stone pillars and is home to many different plants and flowers. The wisteria, which needs to be vigorously pruned a few times a year, is the first of the much sought-after climbers to bloom in the south of England. And when it does so, the scent is truly intoxicating! 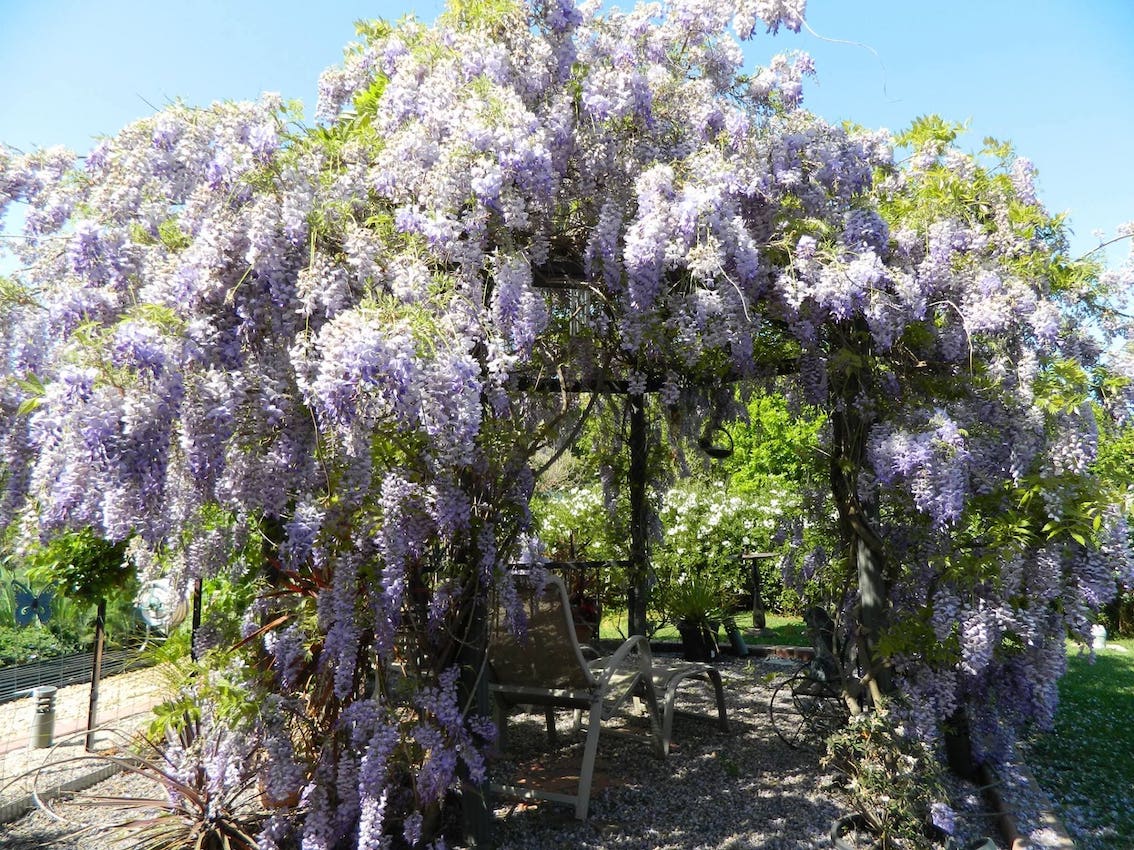 Sunlit and sheltered – that’s what makes the perfect spot for the sun- and warmth-loving wisteria. And if you plant your wisteria in an area like this, it will repay you by producing cascades of especially lush and gorgeous blue-lilac blossom. Seemingly unstoppable, it will wind its way around anything that comes within reach of its long vines. In next to no time, it’ll shoot eight to ten metres up a wall and towards the heavens. But when it comes to producing blossom, it’s not just the wisteria’s height that plays a role. This fascinating climber actually blooms more impressively the more its snaking stems can stretch out sideways. In short, both height and width are key. If you encourage a wisteria’s vines to grow horizontally – for example, by attaching the main stems to a wall trellis – it’s more likely to form new buds.

But wisteria also thrives on gazebos. In the photo you can see a truly magnificent wisteria, covered in bees, that has entirely engulfed a solid wrought-iron gazebo. To take the weight of a wisteria in full bloom like this, it’s essential that the structure is securely cemented into the ground. At head height, the oldest, woody stems are encouraged to spread out horizontally by attaching them to the metal garden pavilion. When the wisteria is in bloom, the wrought-iron garden structure disappears completely beneath a spectacular sea of blue. 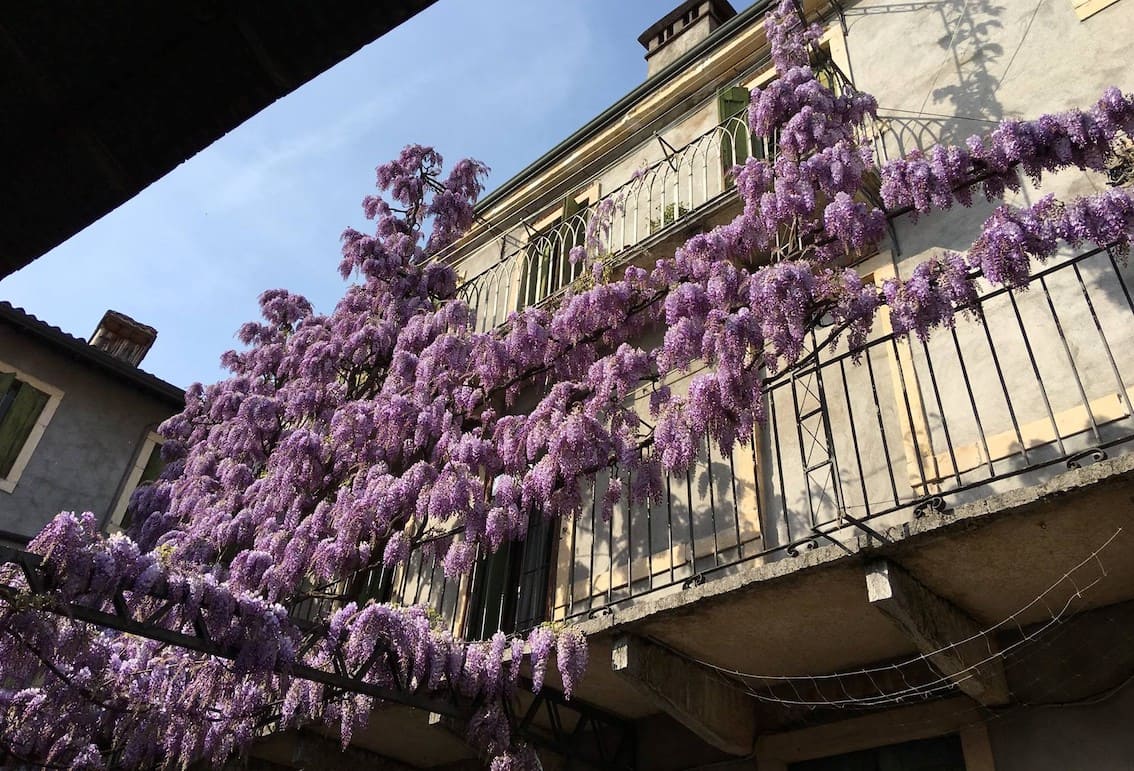 The gorgeous cascade of blossom you see in the photo can be found spilling down the warm southern wall of the Visco-Coffele Palace in the Italian city of Soave. This single wisteria plant has been growing in the courtyard of the Palace, which is also the headquarters of a well-known winery, for over 120 years. For two weeks each year, it is the prima donna of its very own gloriously scented opera! A purpose-built metal framework supports the wisteria on its journey up to the balcony railings.

The wonderfully scented flowers of this Chinese wisteria (Wisteria sinensis) are around 2 cm larger than those of its Japanese sibling. They grow on short stems and in very tight, 20-cm-long clusters, and the flowers bloom each year prior to the plant sprouting new leaves. The bell-shaped calyx has five sepals of varying lengths, and the corolla is light blue to blue-violet. The wings are crescent-shaped, whilst the keel petals bend slightly upwards. Chinese wisteria blooms from mid April and, if in a sunny spot, may bloom for a second time at the end of June, although all of the blossom on any one inflorescence always blooms at the same time. 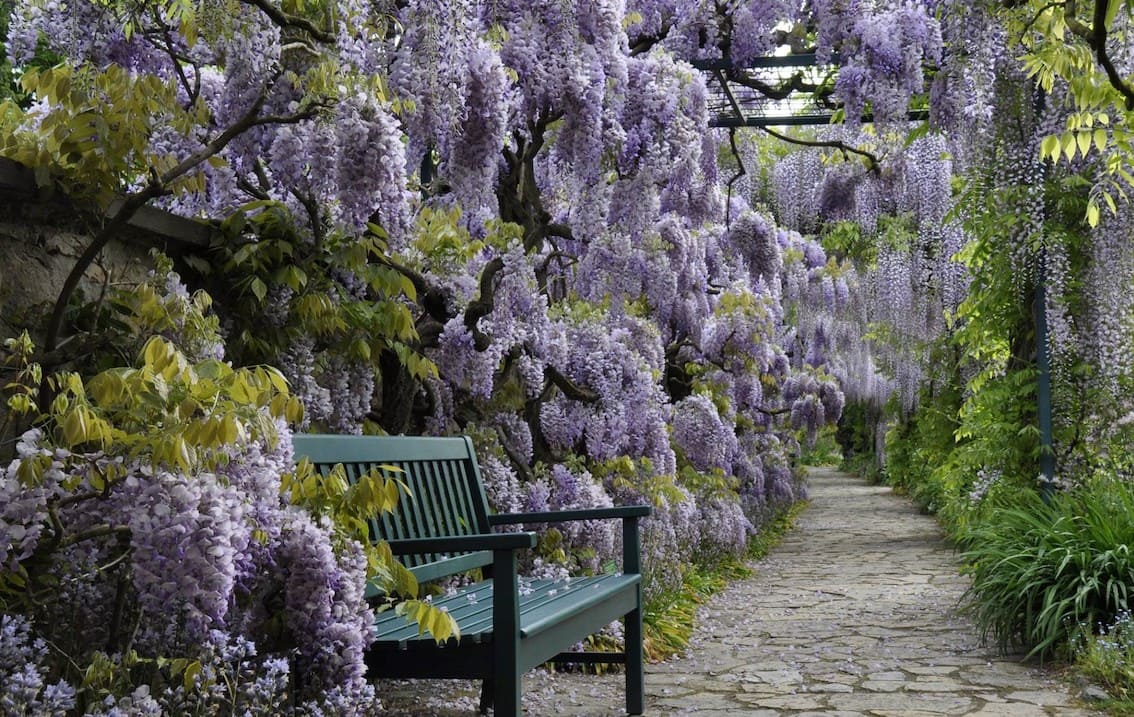 Wisteria in full bloom is almost too beautiful to describe. The wisteria-covered garden pergola in the photo can be found in the Schau- und Sichtungsgarten Hermannshof, a botanical garden in Weinheim, in a part of the Odenwald called the Bergstraße (literally translated: the Mountain Road). When the wisteria at Hermannshof blooms each May, it is truly a sight to behold. These wisteria plants were planted in 1924 and originate from old varieties grown in the gardens of the imperial city of Kyoto in Japan. There are two varieties of wisteria at Hermannshof – a Wisteria sinensis, a Chinese variety which has shorter flowers, and a Wisteria floribunda ‘Macrobotrys Longissima’, a Japanese variety whose flowers measure over 100 cm in length! In some years, the two varieties even bloom simultaneously, creating the most fantastically scented and breathtakingly beautiful floral spectacle. For decades, the wisteria here has been pruned in a special manner. In late winter, the growths produced during the summer get cut back to three to five buds. Then in the summer, the long stems get pruned twice more. This means that the wisteria grows in a very controlled manner. Left unpruned, wisteria that grows in a clockwise direction can reach heights of up to 10 metres!

Growing wisteria in your own garden

If you’re dreaming of having a wisteria-covered pergola in your garden, then take a look at our St. Alban’s Pergola. This stunning metal pergola is not just suitable for roses – thanks to its especially solid and stable construction and distinctly classic design, it is also the perfect choice for wisteria. The St. Alban’s Pergola comes as standard in black, but if you’ve got something different in mind, just let us know – we would be happy to produce this gorgeous garden pergola in any other RAL colour for you too.